A few weeks back, we got an email from a website called AbandonedOK.com asking us us to check out their site.  We did and we liked it.  Basically, the owners of the site go to a abandoned places in Oklahoma, take some pictures of them, and then post it all to the internet.

After taking a look at the site, it got me thinking about some places they should possibly chronicle in future postings; places that were staples of my childhood, and others that have been abandoned since the Land Run.  Enjoy.

Ask the average Oklahoman about the last time they ate at The Spaghetti Warehouse, and the average answer will probably be “In 1992 with my parents.”  They also probably set in the stupid street car.  How this place is still open is beyond me.

As both an Edmondite and Libertarian, I’m kind of proud that my hometown was once the home to an interactive kid’s museum that educated kids about our free enterprise system and the dangers of government involvement.  That being said, I wish The Lost Ogle was around when this project was green lit so that everyone could make fun of it.  This had to be one of the worst ideas in Edmond history.  It’s worse than Broadway between 2nd and 33rd.

Anyway, I wish that I stole the large cutout of Eli Whitney from the Hall of Giants before the place disappeared.   Speaking of that, what happened to all the characters in the hall of giants?  Maybe AbandonedOK should investigate.

8. Berry Tramel’s Old Place
Am I the only one horribly embarrassed by Berry Tramel? It’s not his writing style, but that the good people out at the dark tower thought it would be a good idea to put a camera on Berry and have him talk. To that I say “BULLFEATHERS!“. One look at the guy and you’re kind of surprised he can even form complete sentences, let alone form a logical thought.

Ok, maybe I’m being too hard on the guy, but I still cringe at the though of Berry Tramel representing Oklahoma in the sports media world. Get some new clothes Berry and make an honest effort not to appear like the DOK pays you in crack.

7. Celebration Station
So this place isn’t really abandoned, but I miss the go-karts and bumper boats at Celebration Station. I could own the Addam’s Family pinball machine for like an hour on one dollar. I miss cashing in my hard earned tickets for glow in the dark bouncy balls and sour warhead candy.  I certainly don’t miss the pedophiles that used to walk around that place with bags of tokens and stacks of tickets vying for the attention of young impressionable boys trying to get ahead in the token market “¦ Wow, I think I just unlocked a suppressed memory.  Damn you, Chad!

6. The Dell Building on I-44
So I hear the economy isn’t doing so hot these days. No place in Oklahoma has shown the signs of the recession more than the Dell sales buildings. Everyone in OKC knows at least one person who used to work at Dell and now works at Office Max.

5. The Guthrie Boys Home
Compliments of my friends at www.prairieghosts.com.  This place is bad ass, haunted by an evil nurse maid and the torched souls of orphans.  From the site:

According to legend and accounts of Guthrie citizens, the nurse maid was a brazen, evil, and hideous women who died in her early 50’s. Once the stories of abuse by the nurse maid reached the powers that be, they immediately questioned her and realized that she was guilty of all accusations. In a fit of rage, she sought revenge on the individuals who had exposed her heinous deeds, which so happened to be the boys she was abusing. If memory serves me correctly, the total number of boys the nurse maid murdered was 6. Legend goes that between the hours of 2am and 6am cries and screams from the boys can be heard in any section of the home and that the ghost of the nurse maid is said to lurk in the main entry hallway, which is extremely long and creepy, the pool and recreation area, and the dormitories where the young boys retired each evening.

This makes me want to head out there tonight and go Ghost Hunter on the tortured spirits asses. 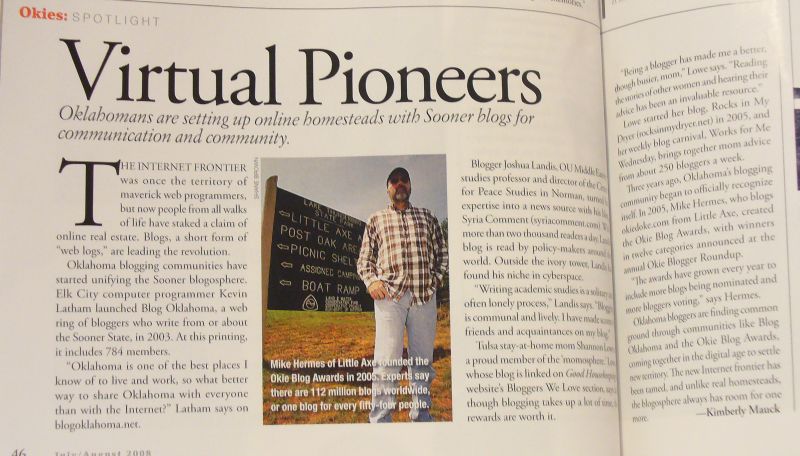 Fellow Oklahoma Blog Okiedoke.com is in the process of shutting its e-doors and leaving all of us with an empty feeling come “Okie Blog” award season. At least now we don’t have to feel the stinging defeat year after year from the all powerful mommy bloggers. Eat that Pioneer Woman!

3. Where ever this place in Tulsa is
Holy !@it… After these pictures surfaced the only thing I wanted to do was take a cold shower and cry. There is no way anyone could walk into this mystery Tulsa establishment knowing Biker Fox got chub in sweaty tights somewhere around where you’re drinking and want to stay. I say burn the place to ashes.

Frontier City is kind of cool these days, even though no one goes there anymore”¦in fact I think it’s cool for exactly that reason. My memories of Frontier City were never good, well”¦I always remember being really excited about going to Frontier City and leaving hoping we never went again.

When I was a kid the place was always packed and my dad was too cheap to buy any food or cold water, also he wanted to “get his money’s worth” on that double park season pass so we all ended up staying for, like, 12 hours at a time. There is nothing fun about waiting in line for rides, drinking dirty/luke warm well water out of a rusted water fountain, watching amateur magicians for nothing more than getting out of the heat, sitting in a misting walk to avoid getting heat stroke, and checking all the arcade games for quarters so I could afford to pay Mortal Combat for 10 minutes.

Ok, so it’s not technically a place, but the games will be no less abandoned. I remember going to Blazers games as a high school student when the coolest thing downtown was the Quiznos next to the Tinder Box Cigar shop where I bought my first tobacco pipe. My “crew” would catch a hockey game just before walking around the original MAPS construction and lighting firecrackers in the unfilled canal. The Blazers are the reason I became such a big Washington Capitals fan when I was in DC, and coach Sauter is the reason my facial hair is the way it is.

So please, a moment of silence for another staple of my childhood that’s been laid to rest next to the 89ers and Calvary”¦

Desolate stretch of Oklahoma highway could be named after Donald Trump…