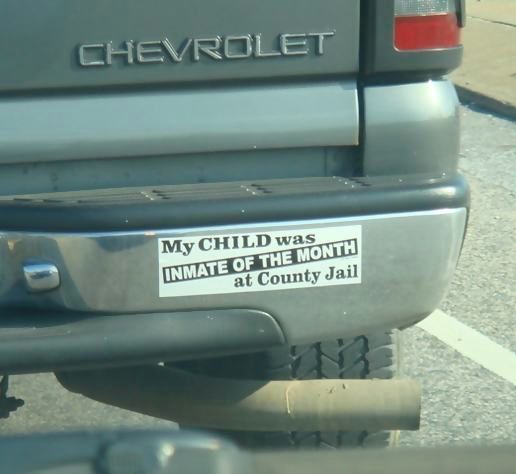 Note to everyone. Should you spot a driver who has a:

(A) Car door secured with bailing wire,
(B) Female passenger vomiting out the window,
(C) Vomiting passenger who falls out of car after the bail wire comes loose,
(D) Second male passenger tumbling out, after unsuccessfully grabbing first passenger, and
(E) Truck that crashes into a wall around 1 a.m….

Tulsa Police arrested a man on a complaint of driving under the influence after successfully completing “A” though “E.”

I had hoped the driver was Randy Terrill and the passengers were Mike Christian and Debbe Leftwich.  Nope.  They’re too busy abusing the system in their own way … allegedly … allegedly.

Most likely, the trio had just left a teeth-optional bar.  A bar where women, who spend their sober hours screaming at their pantless children, go to meet men. After a few dozen rounds of beer and political conversations about Pallin’, Obamer and Mooslims, the group left for their trailer park cottage in the suburbs.

I shouldn’t have preconceived notions about the type of people who fall through loose-bail-wire car doors, but I’m pretty certain they’re disgusting skank whores.

Maybe next time he’ll try duct tape or a sliding door latch. If he wants to upgrade, he could add an air-conditioner outside his back window.

Although it’s another humorous case for people who could use a full-frontal lobotomy, it’s not as exciting as a horny-tattooed-man trying to run over his landlord, but Patrick already grabbed that story.

10 things they’ll find when they drain the Bricktown Canal…